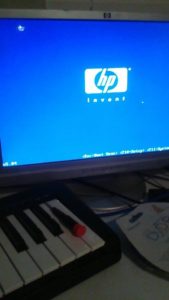 A common issue with older HP computers is that they will often get “stuck” when reaching the blue loading screen. It seems like no matter how long you wait, the computer will never finish booting up and loading Windows. I say seems because there are some people out there on the internet who claim that the issue has occasionally “resolved” itself when they left it like this for more than three hours.

But I don’t think a three hour boot time is a well-functioning computer, so let’s review some of the issues that cause this problem to occur.

Inside the motherboard, there’s a section known as the CMOS RAM. It holds the small bit of data configuring computer’s BIOS that is required for all boot-up procedures. Before your operating system even has a chance to load, the BIOS needs to be up and running. This is usually where the problem is occuring in these cases of an HP computer that is frozen at the blue HP screen.

The simple and easy solution is to remove and replace the CMOS battery. It’s a small watch-style battery that is clamped on to the motherboard – and let’s be honest, it probably hasn’t been changed since you bought the machine ten years ago. If the battery was simply getting drained, this quick $5 fix can get your computer starting up like new again.

It’s also possible that there is some static electricity building up along the components within the machine. If this is the cause of the problem, it can be fixed by unplugging everything from the AC adapter and monitor to the mouse and keyboard, then holding the power button down for at least seven seconds. I know – a computer isn’t supposed to be storing up residual static power like that, but this seems to be a known flaw in this particular model of HP motherboards because this process has been given as standard advice by actual HP reps.

If a new battery and static discharge isn’t fixing the problem, however, there could be much more serious hardware failures going on. Sometimes there is physical damage or data corruption in the CMOS RAM, and the only real way to fix that is by replacing the motherboard. For an old machine like this, that might not even be a good deal in comparison to simply buying a new computer.

It’s also possible that a hard drive is starting to develop bad sectors of data. They also tend to break down gradually over a five to ten year horizon, so it is worth running a utility to ensure there is no data loss on the drive. Of course, that also reinforces just how important it is to make regular backups of essential files – because it is a matter of fact that hard drives simply die one day. CDs, DVDs, and Blu-Ray Discs are all a great solution for long-term storage because they won’t break down unless you scratch them up!

Luckily, the HP computer shown in this image was able to be fixed with a new battery and a static discharge procedure. There were no extra components to buy, but it did take about an hour of diagnosing and repairs to get the machine back online again.